The northern coastline of Peru is blessed with perfect sets of rolling waves and a year-round mild climate. It is also home to the city of Trujillo, the picturesque colonial city. Yet, there is another more fascinating reason you should visit. Almost 2,000 years ago, with their bare hands, the first settlers of the Moche Valley achieved the seemingly impossible. They created fine jewelry from crude metals, fishermen’s raft that could surf the waves, and Farmland in the desert.

From this desert plain’s treasure trove, it is clear that the Peruvians developed impressive artistic, architectural, and agricultural insights long before the arrival of the Europeans. Once the Spanish arrived, they swiftly created one of the largest and finest cities in Peru – Trujillo. Exploring this compact city center is more like browsing through an open-air museum of Spanish colonial architecture. Everywhere you go, you will pass colorful mansions adorned with enclosed wooden balconies and tall window grilles. 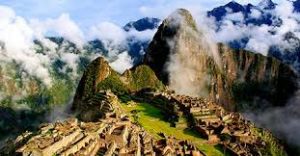 For over 400 years, the Cathedral’s exterior on the Plaza de Armas northern end has largely remained unchanged. Step inside to admire the central altarpiece of the cathedral and the precious religious paintings. From the Historic Center, it is only a short taxi ride to the 17th-century mansion of Trujillo’s Archaeological Museum. The exhibits here paint a picture of the pre-Columbian peoples of northern Peru. 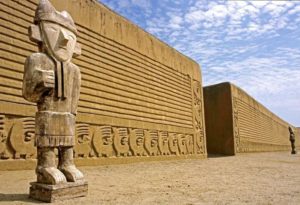 Start your tour of this region’s famous ruins at the Temple of the Sun and the Moon. Once the world largest adobe pyramids, they are made from millions of sun-dried bricks. Although the Moche people’s language has been lost, we can interpret their beliefs and habits through their brilliantly expressive artworks and elaborate murals. They were warriors that sacrificed their rivals to appease the gods.

The elites of the Moche were buried in pyramids just like the Egyptians. See one of the most mysterious mummies in the world at El Brujo where the Lady of Cao was discovered as recently as 2005. This Moche woman’s tomb also held copper jewelry and darts, suggesting she was a warrior or priestess.

It is believed that the relentless El Nino rains lead to the Moche culture demise. Around 900 A.D, by the time the Chimu people arrived, the landscape had transformed into an arid coast. The Chimu cultivated reed to make fishing rafts just like the Moche and used minerals and clay from the river valley for their decorations and building bricks.

To explore what was once America’s largest adobe city, visit their capital, Chan Chan. Follow the maze of corridors of the city to central courtyards, which were decorated with animal reliefs and fishnet patterns.